“The privatization of the justice system” – those are the words Cornell University labor law professor, Angela Cornell, used to describe the Supreme Court’s recent ruling on workers’ rights and employer forced arbitration. The Epic Systems Corp v. Lewis opinion authored by Justice Gorsuch effectively allows employers to force their employees to waive access to the use of the public courts in exchange for arbitration.

The lawyers for the employees described the Supreme Court’s decision as a “devastating blow” ending the ability of workers to get together and file collection wage dispute complaints or sexual harassment claims.

Now, millions of nonunion employees are barred from collective suits over the employment issues.

Forced arbitration is not a new development in the employment setting. However, until Monday (May 21, 2018), the National Labor Relations Act allowed for the possibility that employees could in some situations (i.e. “concerted activities” protected under the NLRA) file collection legal actions.

One of the founding policies within the NLRA is that it exists to counter “inequality of bargaining power between employees who do not possess full freedom of association or actual liberty of contract and employer who are organized in the corporate or other forms of ownership association.”

The Court’s 5 – 4 decision “puts the nail in the coffin on the one open question of whether the NLRA would preclude this,” said Debra Katz, a Washington employment lawyer. The majority decision, authored by Justice Gorsuch, held that the Federal Arbitration Act allows federal courts to enforce “arbitration agreements according to their terms  – including terms providing for individualized proceedings.”

There are concerns that this decision will effectively silence employees who experience workplace discrimination like sexual harassment. Not to mention the timing of the decision could impact the #MeToo movement.

Many, like dissenting Justice Ginsburg, are already concerned about the lack of transparency in arbitration. Not to mention, many arbitration agreements often include nondisclosure provisions so workers will be at a disadvantage walking into the process.

Justice Ginsburg’s dissent portrays a bleak future where “Employers, aware that employees will be disinclined to pursue small-value claims when confined to proceeding oneby-one, will no doubt perceive that the cost-benefit balance of underpaying work.”

Only time will tell. 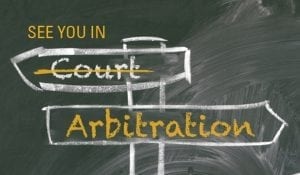