Book Review: Irresistible – The Rise of Addictive Technology and the Business of Keeping Us Hooked by Adam Alder (320 pages, Penguin Books, 2018)

Book Review:  Irresistible – The Rise of Addictive Technology and the Business of Keeping Us Hooked by Adam Alder (320 pages, Penguin Books, 2018)

Addictive technology is alive and well, and lawyers need to understand what’s happening to our clients, jurors, witnesses and even our own children. Alder begins his book in jaw-dropping fashion when he explains that in 2010, although Steve Jobs spent 90 minutes explaining why everyone should have the amazing new iPad , “he refused to let his kids use the device.“ Other executives had similar restrictions and as one stated: “ We have seen the dangers of technology first hand.”

For example, a game called “World of Warcraft“ is so addictive that even video game designers avoid it like the plague. “WOW may be one of the most addictive behavioral experiences on the planet.“ There are thousands of people on the other side of the screen whose job it is to break down the self-regulation you have.“ They have learned through testing millions of users what works and what doesn’t in the world of addictive behaviors. “Addictive technology is part of the mainstream”…..and “Abstinence isn’t an option.“ In short, it is not going away, so we need to be aware of it and recognize the danger it represents.

According to Alder, behavioral addiction is an addiction that has a deep attraction to an experience that gives rewards, but it’s harmful and difficult to do without.“ Between 2000 and 2013 the average attention span went from 12 seconds to 8 seconds. In 2008 an addict spent 18 minutes per day on the iPhone. By 2015 it was two hours and 45 minutes. 280 million people are now addicted to smart phones. “Human attention is dwindling.“

There is actually a gaming and Internet addiction treatment center near Seattle, Washington. It treats hundreds of people who stop interacting with others, who stop sleeping and eating regularly, and who become physically sick because of their addiction to the Internet. Part of the treatment plan is teaching the patients how to problem-solve, which isn’t a traditional form of therapy. The first plan of treatment is total avoidance for three weeks and then re-learning basic skills of living. The second part of the plan is going to a halfway house , seeking jobs, volunteering, hiking outdoors, and/or taking college classes. The third phase is full re-entry with the ability to come back and start over if necessary. Alder discusses various experiments and studies about addictive behavior and looks at it from a biological and psychological perspective.

Although not the best written book, the subject matter is so important that I would consider it essential reading. Alder makes you aware of how widespread the problem is and then he gets you thinking about how to control the beast that threatens us all, particularly children and young adults. 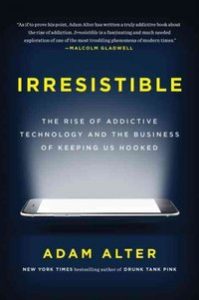 By Kristina Brown Thompson|April 9th, 2019|Attorney-Client Relations, Book Review, Community|Comments Off on Book Review: Irresistible – The Rise of Addictive Technology and the Business of Keeping Us Hooked by Adam Alder (320 pages, Penguin Books, 2018)