This book contends that the election process in the United States is broken, and that we may want to consider other systems for authorizing leadership. Jason Brennan is careful not to advocate for any particular method, but makes it clear he has distain for the current system.  “Asking everyone to vote is like asking everyone to litter.”

He cites studies to show that “… most citizens cannot identify any congressional candidates in their district, … and generally don’t know which party controls Congress. … Forty percent of Americans do not know whom the United States fought in World War II.”   Of special interest to lawyers, or anyone who seeks to inform or educate others in  order to reach a rational decision (think of a jury, an adjuster, or an administrative law judge) is Brennan’s quote from psychologist Jonathan Haidt that people make decisions that are illogical “… because they systematically strive for arguments that justify their beliefs or their actions.”  Brennan calls it motivated reasoning.  He argues that people want to arrive at decisions that make them feel good and the way they do that is to conform evidence to support their own beliefs.  It is tribalism in its most basic form.

It can be compared to asking rabid basketball fans to be neutral referees in a game involving their favorite team. Under those circumstances it is hard to be unbiased, no matter how obvious the foul.  It is similar to “confirmation bias,” where you interpret facts to support your existing world view.  The key to success is finding out the world view of the decision maker, and then developing evidence that supports that view.

Should you read this book? Probably not.  Although it is thought provoking at times, it offers no real solutions and the author sounds like an elitist Libertarian on top of Mount Olympus, looking down on  the ignorant people below. He fails to realize or admit that although democracy may not be perfect and is certainly flawed, it is better than any alternative that has yet to be proposed for a free people. 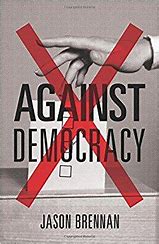 By Leonard Jernigan|April 30th, 2018|Uncategorized|Comments Off on Against Democracy By Jason Brennan, Princeton University Press (2017) 245 pages